We the People, Social Media, and Qualitative Research 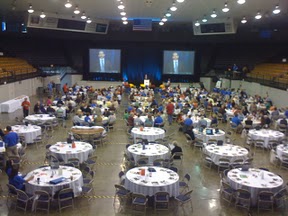 The event brought together nearly 300 locals to discuss local issues centered around Education and the Economy. (A participant guide from the event can be found here.)  This was the second We the People event held in my hometown of Owensboro, KY, the first one being in 2007.

Our local group consisted of four folks (me, Steve Metzger, Jessie Schartung, and Michelle Montalvo).  I set up an event of Cover it Live at the Owensboro Blog.  The interface was free, very easy to use.  After talking with Mary Lauran Hall with AmericaSpeaks the day before, we set everything up and organized ourselves to pull this off late in the afternoon the day before the event.  This came upon us quite spontaneously.

I'd like to devote the remainder of this blog post to addressing some insights from the process, with its implications on citizen journalism and qualitative research.

Qualitative insights
Social media and social networking tools are disruptive tools in the media-sphere.  Particularly in our local community, social media and social networking tools are still largely viewed as new and for entertainment purposes.  Social media and social networking tools are primarily open, accessible, and can be implemented by anyone with the initiative to learn how to do so.  Pulling together these tools to document and regard an event of this type is not entirely difficult, but it does take some thinking and planning.  I have been working in this fashion in various ways for several years.  We like to think that as a result of our process that we not only documented the event live, but we were able to give lasting insight into the minute-to-minute, stage to stage process of dialogue and deliberation of participants during this event. 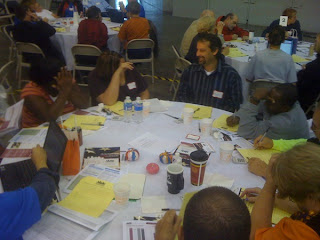 Usually during We the People events the first draft of information received is the draft final report handed out at the end of the day.  During our project, we were able to document quotes, feelings, raw ideas and beliefs of participants as they shared those in the moment, in dialogue and discussion with other members at their particular tables.  While this information served as a social media component because it was live, the real benefit is that this information is also archived, giving organizers, staff, researchers of the process particular insight into the emotional give and take often experienced as participants delve deeply into local issues.

The AmericaSpeaks were nothing but extremely supportive of our work during the event.  We obtained a .pdf copy of the initial final reports immediately after they were distributed to participants.  We shared that online and made it publicly available to anyone.  Part one of the document can be found here, part two can be found here.

This is significant as it relates to qualitative assessment and analysis.  We live in a culture (societal and in the academic community) that largely focuses on quantitative information: giving us the overarching view with little attention to detail and the quality of feeling of individuals and small groups.  By organizing qualitative research as we did with this event, we now also have the added dimension that gives depth of context to the results from the day long town meeting.  Therefore, this process can be used not just for documenting a live event for those unable to be physically present, but this process should also been seen as adding another layer of context to the overall town meeting and the results derived by the participants.

In our particular effort we worked to provide rich media, including photos, audio, and video accounts of activities occurring in the moment.  There are variations of intensity that can be conducted in documenting an event live.  Given our very quick turnaround on organizing for this event, we were unable to strategically plan how we would do the live tweeting/blogging.  In future instances, this would be an aspect to have better control.  Some particular options are having members of the team focus on specific activities.  For example, one person document via photos, others via text, others recording and uploading video.  The beauty of the Cover it Live interface is that those moderating the interface can include content from the outside.  In our case we did pull in this rich media as we were able to, including tweets from not just our small staff, but tweets from the AmericaSpeaks and tweets from the few participants that were tweeting from time to time.  We also brought in other content on the web, relevant to the event.  So for example we posted the participant guide so online participants could follow what was being covered in the physical setting.

Reach
The Cover it Live web based software does include stats.  Given our limited time for marketing, we did not expect that our live event would garner a whole lot of outside participation.  But keep in mind we also approached this as an effort of documenting the day, so it will be hard to tell how often the event (which is archived on the Owensboro Blog) will be viewed later.  In fact we do expect that qualitative insight into the day can be had by viewing both the archived Cover it Live instance and the backed up tweets from the day (found here).

During the event it appears we had around 20 people actively engaged in commenting and viewing via the Cover it Live interface.  During this particular event there was not much effort of online participation in the event via our interface.  We were unable to design the interface in such a way this time around, but options are available where such an effort could gain more traction and significance for online participants if established and communicated well in advance of the day of the event.  AmericaSpeaks does have experience in linking several physical locations at the same time, incorporating a collaborative web component to do so (or like service).

Below is the archived event on Cover it Live


In our effort each of the team members tweeted to their followers and posted links to our information on Facebook.  In total we theoretically have a reach of at least 1500 followers; people from all over the world, national, statewide, and not just locally.  So there is some consideration that needs to occur about the impact of such a reach, the impact of the process as it ripples through social media.  How many folks will research this process?  How many will read recommendations on live tweeting/blogging an event and using the data for further qualitative analysis via this particular blog post?  These are very relevant in the face of the reach and impact of social media and its content, and the utilization of data for for research and ultimately procedural and policy implications.

Notes on process
We were mobile with our approach.  We established our "base of operations" on a back table, essentially sitting down and connecting with our laptops.  Although I haven't mentioned, it's hopefully obvious we had a local wifi network established via the technical capacity of the AmericaSpeaks folks.  This was a must for us to do our work.


Because we were pulling in tweets with a certain hashtag, we were able to take our mobile phones out amongst the tables and mobile blog/tweet.  I found it intimate to listen to quotes from tables and directly tweet those; these ended up in the Cover it Live interface and were backed up as previously mentioned.  It still is rewarding to go back and view the quotes that we pulled in from participants in the moment.  This data is from participants in deep conversation with others, considering ideas and sharing those perhaps in a very rare safe and inviting environment.

These are some initial thoughts that seem to be bubbling up as I continue to reflect on this process.  Below was the initial debrief that our local tweet/blog team shared.