- November 01, 2020
It's required by law for candidates for office to report financial data. Here's a look at campaign finances for pertinent upcoming elections.
Here are some key points and observations:
* most campaign dollars for local elections come from the candidate and the candidate's family funds.
* you need at least $5,000 to run a respectable city commission campaign. That doesn't mean you can't win on less. 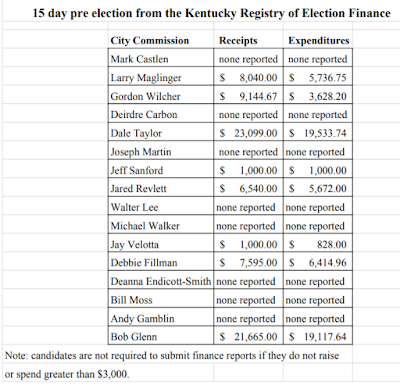 * only 8 of the 16 city commission candidates have reported finance data. This could mean they have raised and/or spent less than $3,000. Local candidates only have to provide financial data if they raise or spend more than $3,000.
* the likely winning mayoral candidate will have raised and spent nearly $10,000. Per this report Conder has spent over $30,000 and Watson over $43,000. They both have more to spend. 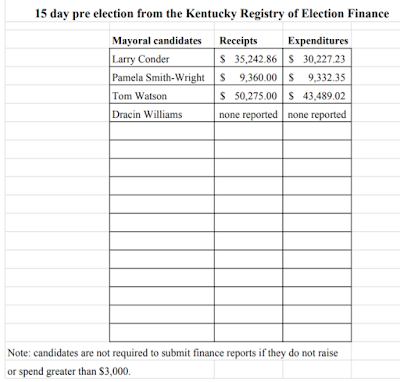 * be mindful that a lot of campaign money usually is spent between the 15 day report and the post election report. The post election financial data usually indicates a jump in expenditures in the 15 days leading up to an election.
* there were no financial reports for any of the Board of Education candidates.
I provide the U.S. Senate race data for comparison. Keep in mind the Senate race in Kentucky is hotly contested.

All of the state and local data above is found at the Kentucky Registry of Election Finance: https://kref.ky.gov/Pages/default.aspx
The data for the U.S. Senate race is found at the Federal Election Commission: https://www.fec.gov/data/elections/senate/KY/2020/
Sociology - Politics