On MLK and Dignity

- January 20, 2020
My family's background in justice was pivotal in both my educational and career trajectory. My graduate studies centered on culture and development. I've been teaching Sociology since 1993 and certainly over that time topics related to race, gender, social class, and sexuality have been at the center. Since 2006 I've taught Inequality in Society, and it is through this work in the classroom with students that my perspectives on inequality have come clearer in focus.


In the fall of 2014 I was approached by colleague Dr. Lewatis McNeal about speaking at the upcoming MLK Day event on our campus. Dr. McNeal was part of a local planning committee for the event. I frankly was stunned. What business does a white male have in giving the keynote address at this prestigious community event? Lewatis and I did know each other but I tend to think he knew something about me that others did not know: that I had an educational background similar to Dr. King, and that I had a unique interest in race and equality. Now, each MLK Day I share through my social media the transcript of Dr. King from Morehouse College, where he majored in Sociology and took the following courses: Introduction to Sociology, Contemporary Social Trends in America, Social Anthropology, Intercultural Relations, Social Institutions, Social Legislation, Statistics, Principles and Methods of Statistics, and a Seminar in Sociology: 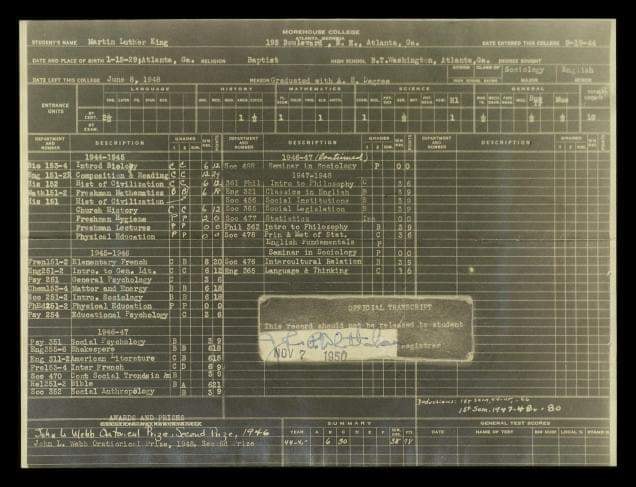 Dr. McNeal and I did discuss that in our initial meeting, and I did accept the incredible honor of speaking that January 2015, to commemorate MLK. That invitation and that presentation stands as one of the highlights of my life and career. So much so that each MLK Day I do find myself reflecting even more on his life and how my life and work relates to his.

Below is the presentation I used that day (I've removed two slides from the original because they included links to sources that no longer function):

This year on Martin Luther King, Jr. Day I'm stuck in reflection on many things. I would not consider myself an MLK Scholar, but my daughter is an official one at the University of Louisville. She's on scholarship there as a MLK Scholar, and it stands as a huge badge of honor for her, for me, and our family. We were both very excited to be able to visit the MLK Memorial together in March of 2019.

While I'm a fan of Bob Dylan and his catalog I'm certainly not well versed on his variety of albums and songs. I believe I only became first aware of this song "Dignity" not too long after he performed on MTV's Unplugged in 1994. His pronunciation of the word dignity simply was enough for me to fall in love with the song and its subject matter. I was an early graduate student in sociology in 1994 and was pursuing topics related to dignity.

What Dylan speaks to is the various circumstances where one looks for dignity. Dylan suggests everyone is looking for dignity, even in the most unlikely of places. Dignity is not simplified, and as Dylan attests, sometimes dignity cannot be found. For example:


"Got no place to fade, got no coat
I'm on the rollin' river in a jerkin' boat
Tryin' to read a note somebody wrote
About dignity

As I reflect today on Martin Luther King, Jr. Day I can't help but to think about dignity. King was deeply concerned about dignity. He thought about it, studied it, and it was a deeply spiritual conviction. Dignity is found sprinkled throughout his famous quotes, and certainly it was at the heart of his movement for equal rights.

In light of the political climate related to topics of equality and rights (both local and national) over the past few years, I found myself in a moment in March 2019 while visiting the Lincoln Memorial. There I thought about Lincoln, and what he would think about the state of politics and our culture. As I stood at the top of the steps, I turned around and reflected on Dr. King's "I have a dream speech," given in front of 250,000 people across the Washington Mall. 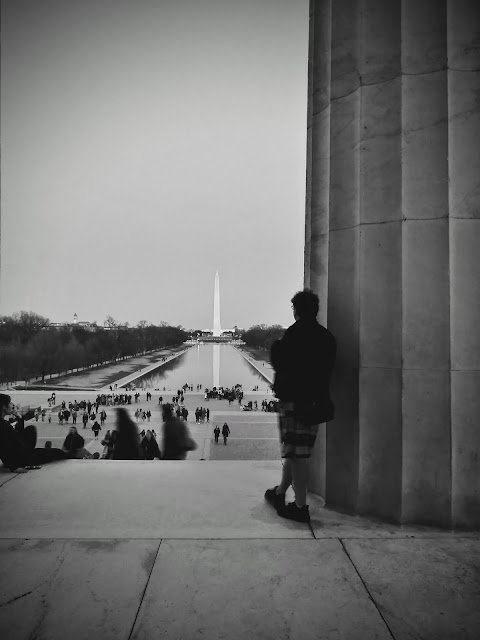 Today in 2020, I continue to think regularly about these topics. I continue to teach about them, and I continue to work to live in such a manner as to personally respect the rights of every person. I too find myself thinking about my own dignity. Where do I find dignity? How do I get dignity? Dignity belongs to everyone, even in the smallest of ways. Dignity can take the form of introspection of self, of others, in interaction, in inaction, in culture, and in society.

But doesn't dignity seem lost within modern life? Even the consideration of dignity is complicated. I do think Bob Dylan's "Dignity" is particularly poignant in this regard. It is perhaps through this type of art that this importance in life and living can be accessed.

Dr. King's consideration of dignity took many forms. It took the form of dignity by recognition of the rights of others: through race, social class, creed. And yet access to dignity can exist in so many other contexts of human interaction and form. And the consideration of dignity is not just when it's convenient. It's now, and it's all the time. This underlies the challenge posed to every person by Dr. King. Not only where does one find dignity, but how do our interactions, our culture, and our society provide a context for which others too can have access and find dignity?

I do not underestimate the importance of the emotional, intellectual, and relationship work of the recognition of dignity. I think it took Martin Luther King, Jr.'s early life experiences and his studies of topics related to dignity for him to then to have found the courage to act out his principles in real time: in interactions, with others, and in society. No, he absolutely was not perfect. And getting access to the subject of dignity is not always a straight shot or linear. But it became to be his effort, his work.

Let's continue to take that intention forward in our personal lives, in our interactions with others. It takes work, it takes time. Keep at it.